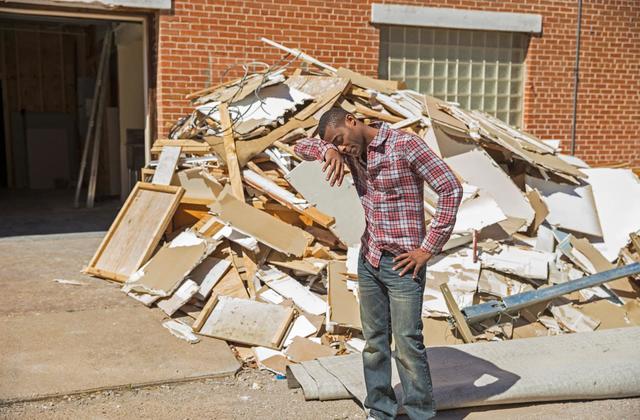 Measuring twice is still a thing.

Doing a little home improvement on your own can be a great way to cut costs on a project. But you can find yourself having to do a project over again or in the middle of a dangerous situation if you don’t have a firm grasp of what you’re doing – no matter how many YouTube videos you’ve watched. Home inspection and contracting professionals weigh in on some of the most common do-it-yourself hacks that are a major don’t.

Permit regulations vary depending on your location, but they are often required when conducting plumbing, electrical, heating or air work to ensure a home is safe. There will be an extra cost, but it’s worth the price over getting caught doing the work without a permit, or far worse, doing the work wrong. “The permits are there to enforce minimum quality standards,” says Michael Flanagan, heating, ventilation and air conditioning manager for Michael & Son Services in Richmond, Virginia.

Leaving wires exposed is an obvious no-no, but they also need to be covered properly when they’re hidden. Frank Lesh, the executive director of the American Society of Home Inspectors, says inspectors commonly find exposed wires in suspended ceilings of recently finished basements. “It’s not that someone’s going to touch it, but mice are everywhere … and they start gnawing on the electrical wire and insulation,” he points out. “And if there’s no cover on [the wire] … it could rub up against metal and short-circuit.”

Attempts at adding circuits or overloading circuits can easily cause you to blow a fuse. Dave Geradine, owner of Expert Home Repairs in Hollywood, Florida, says electrical work is particularly sensitive because a connection could work a number of ways, but its flaws may not be apparent until it’s too late. “If you don’t make your connections properly, you can have … an electrical fire caused by an arcing of the two wires that aren’t tightly connected,” Geradine says.

Closing vents to focus heat on another part of the house

Winter is coming, and parts of your house may feel it more than others. You may be tempted to close the vents in one room to send more warm air to other parts of the house, but Flanagan says that’s a bad idea. “While you can close some vents to force more air to this part of the house and that part of the house, you’re destroying your efficiency and you’re certainly shortening the life of the equipment,” he says.

Electric space heaters are another way to heat up those colder rooms, but be careful where you put them. Lesh says people often push up space heaters against curtains or place them in other areas where they become a fire hazard. Jury-rigging a space heater to sit above a baby’s crib is a definite don’t. “A truck could go by or an airplane, and this little heater on the shelf could fall into the crib and start a fire,” Lesh says.

Replacing a floor is a great way to make a room feel new again, but you should always remove old material, such as tile or linoleum, before putting new flooring on top. Otherwise, you could find yourself with an uneven surface, and you’ll have to replace it yet again. “You always want to go down to the bare wood or concrete surface when you do new flooring,” Geradine says. If you don’t? “What’s underneath your new flooring fails, [and] then your tile comes up,” he says.

Finding the right pipe to match a section of plumbing that needs replacement can be tricky and expensive. Aside from leaks, which are possible with ill-fitting pipes, Lesh says you can easily raise a new bunch of issues without even realizing it. For one, replacing a portion of copper or steel pipe for a water heater with a plastic option can spell out danger. “If your electrical system is using the plumbing pipes for grounding, there has to be a circuit there,” he explains. “If you replace one of the water pipes with something that’s not conductive like steel or copper … then you no longer have that ground. And then the house could be ungrounded, so that could be a fire or safety hazard.”

Using standard outlets near a sink or tub

If you don’t already know that water and electricity don’t mix, put the drill down. When remodeling a bathroom or kitchen, be sure to use outlets that include a ground-fault circuit interrupter for any areas near water. In the event an appliance that’s plugged in falls into water, the GFCI will trip the electricity so it cuts off, Lesh says. Otherwise, “if you have a conventional receptacle, then you could get electrocuted.”

Sadly, duct tape is not an effective go-to tool, and most likely neither are those fancy tapes and glues you’ve seen on infomercials. “Those spray-on glues and the tape that stops the leak in the water pipe you see on TV does not work,” Flanagan says. When it comes to taping or gluing something together, there’s typically an adhesive specific to the need that is most effective and least likely to cause problems down the line. For example, Flanagan says heating and air professionals use foil tape.

Fastening a deck to a home with nails

The more people a structure is expected to hold, the bigger the bolt should be to hold the structure in place, especially when adding a new deck onto your home. Lesh says home inspectors frequently see decks attached to homes with nails, when the project requires specific bolts to secure the structure. “Every year a deck collapses because a guy just used a whole bunch of nails to attach it to the house,” he says.

Painting over chipped paint or wallpaper

While you may think a couple coats of paint could have any wall looking brand new, it’s important to make the surface smooth and clean first, particularly if you’re looking to get rid of old wallpaper or chipped paint. “Paint will moisten the wallpaper and then make it bubble. And then you have to cut out all the bubble spots and fill them with joint compound,” Geradine says. Ultimately, you’ll have to remove the wallpaper anyway, and it’s far easier to take off without paint over it.

Many older homes could use a bit of TLC, but be wary of the dangers that could be lurking beneath the surface. There is a chance that old plumbing could contain asbestos, which isn’t something you want to let in the air. “There could be hazardous material in there, and that is nothing to play around with,” Lesh says. “You can’t just wear a dust mask and take that stuff off – the fibers are microscopic and you can really, really injure yourself long term if you touch that kind of stuff.” He adds that you should seek a professional with noted experience handling hazardous materials to ensure particles aren’t left in the air to wreak havoc over time.

When in doubt, call a pro.

You can be handy with tools and still need to submit to aprofessional’s help sometimes. If you’re unsure of the dangers of a project, contacting someone who does know will make it far less likely that you’ll turn your home into a death trap. “With the trades – plumbing, heating, air and electrical – there may be five ways to do it right, but there’s a thousand ways to do it wrong,” Flanagan says. “And people tend to find those thousand ways before they find the five ways. So if you’re just not confident and competent in what you’re doing, you should just call a professional.”